FIRST GENERATION: WEMS FORD ESCAPE HYBRID
In 2008, Dr. Seth Collings Hawkins published the results of a two-year-long study on a trial hybrid gasoline-electrical EMS response vehicle in the Journal of EMS. This study exploded a number of myths about the supposed inability of hybrid vehicles to perform in an EMS operational environment. It also challenged the idea of sustainability in EMS vehicles, a concept explored in collaboration with the International Institute for Sustainability in EMS (iiSES). For this project, we worked from a 2006 Ford Escape Hybrid platform. In its heyday, this was a truly innovative vehicle. It was the 2005 North American Truck of the Year, the first American-built hybrid, the first hybrid vehicle from an American automaker, and the first hybrid SUV. We retrofitted it for wilderness EMS operations, and demonstrated an EMS response vehicle operating off a hybrid SUV platform would cost 50% less to fuel, generate 50% less emissions, and would carry 10% lower purchase cost versus comparable vehicles already in use with no appreciable diminishment in operational capability aside from towing capacity. Production of the Ford Escape Hybrid ended in 2012, and a new Wilderness EMS vehicle package is needed for the 2020s. Hawk Ventures is at the drawing board again!

We’re currently building a cutting-edge concept vehicle for wilderness EMS operations. Our plan is to have a vehicle road-ready, retrofitted, and equipped by the end of 2019. On Memorial Day 2019, we took possession of our platform truck: a Toyota Tacoma TRD Off-Road truck. Over the remainder of the year we’ll be retrofitting it for medical support of wilderness search and rescue (SAR) operations. Particular thanks to Hickory Toyota for partnering with us on this project, as well as the Sarcoma Foundation of America (SFA). The name SARcoma is a pun, but also calls attention to the terrible disease that sarcoma cancers represent. Here in Burke County our medical community has particular familiarity with this disease due to our memories of Dr. Kevin Tomlinson, former assistant medical director of the Grace Hospital Emergency Department. We don’t know a community that is not affected by the public health scourge that cancer represents. To kick off this project, both Hawk Ventures and Hickory Toyota will be making donations to SFA. We will also be branding the vehicle with the SFA logo, and will have a mission tracker in the cabin. For each wilderness SAR mission, Hawk Ventures will be making a contribution to SFA. In sum, our project is intended to advance the science and capacity of medical field response vehicles in wilderness SAR operations, as well as help mitigate the effects of sarcoma on our communities.

We are remaining consistent with our original model of sustainability, but are approaching it from a different direction: sustainability as defined in terms of reliability and durability, key features for wilderness EMS operations. This was a major reason we chose a Toyota Tacoma. “The Tacoma has a tremendous reputation for reliability,” says Nick Kurczewski, senior multimedia content editor for Consumer Reports. “In the car world, the joke is that after the zombie apocalypse the only things to survive will be cockroaches and Tacomas.”

We have built a team of wilderness EMS and Toyota experts (see below) to advance this project. In August 2019, we were excited to announce the addition of Edwin Choy MD, PhD, an associate professor of oncology at Harvard University and director of the Massachusetts General Hospital sarcoma research division, to the team, who brings world-class clinical expertise on sarcomas. 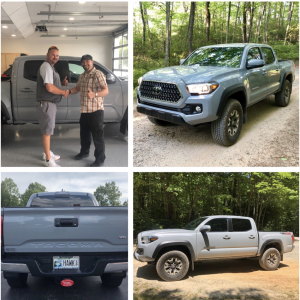