“Few new books on Shakespeare—and indeed on literature in general—are likely to excite more pleasurable anticipation than this one by Sherman Hawkins.”
—Michael Goldman, Professor Emeritus of English, Princeton University; author of Shakespeare and the Energies of Drama, Acting and Action in Shakespearean Tragedy, and On Drama: Boundaries of Genre, Borders of Self

Perhaps the most important, difficult, and unresolved issue in Shakespeare studies is the question of Lear’s last lines; the whole meaning of Shakespeare’s greatest and most controversial tragedy depends upon it. In the 1608 Quarto, it is “O,o,o,o”—that zero to which the Fool compares Lear himself. In the 1623 Folio, the King’s last words are “Look on her! Look, her lips! Look there, look there!” No one but Lear sees what he points us to envision. Is it epiphany or delusion? Is Lear’s tragedy nihilistic or redemptive? In search of an answer, this book deploys a wide spectrum of critical approaches: close scrutiny of the rival texts and comparison with the plays sources, the unique double structure of Lear, its symbols and imagery, its visual and verbal scriptural allusions, even its numerology. The book enlists its readers in a quest for final meaning, not unlike the movement of the play itself towards Dover and the extreme verge of its imagined cliff, that high place where life borders upon death and earth meets sky and sea.

LOCAL BOOKSTORE NOTICE: Hawk Ventures supports local booksellers. This magazine issue is available at our partner bookshop Adventure Bound Books in downtown Morganton, NC. We encourage you to buy your copy there. If you are not local to the NC foothills and your local bookstore does not stock this product, we offer it to you here. 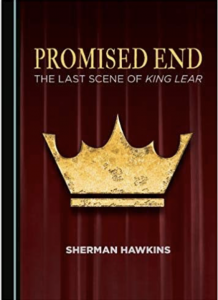 “Invariably brilliant and moving.”
—Arthur Kirsch, Professor Emeritus of English, University of Virginia; author of The Passions of Shakespeare’s Tragic Heroes and Shakespeare and the Experience of Love

“One of the most charismatic teachers who ever graced an academic setting… I’m immensely grateful that Sherman’s magnum opus, this penetrating analysis of King Lear, will finally appear in print. When I had the opportunity to look at an early draft of this remarkable study several years ago, my first thought was how sorry I was that I hadn’t had the good fortune to read it before I produced my Everyman edition of Shakespeare’s most memorable tragedy in 1993. I’m confident that others will feel the same exhilaration that came over me as I made my way through The Promised End. It provides one reminder after another of the insight, wit, and eloquence that Sherman always brought to his conversations, his lectures, and the classes he conducted with such eloquence and generosity.”
—John Andrews, founder, The Shakespeare Guild; trustee, Shakespeare Association of America; author of William Shakespeare: His World, His Work, His Influence; author, Shakespeare’s World and Work; editor, The Guild Shakespeare; editor, The Everyman Shakespeare

“Careful and deep… Sherman Hawkins has a rare ability to look at Shakespeare’s most brilliant comedies and see their deep interconnections in sensibility and outlook. He looked at the world that Shakespeare’s work creates and saw it whole.”
—Gail Kern Paster, director, Folger Shakespeare Library; editor, Shakespeare Quarterly; author of Humoring the Body: Emotions and the Shakespearean Stage, A Midsummer Night’s Dream: Texts and Contexts, and The Idea of the City in the Age of Shakespeare

“He has a keen understanding equally of Shakespeare’s works as poetic artifacts, as dramatic narratives, and as performative scripts, and is equally at home in the classroom and on the boards. It seems utterly fitting that he should have capped his astounding career in the double gesture of playing Lear with unflinching honesty, seeing feelingly the character in its devastating fullness, and explicating Lear with unyielding persistence, bringing fresh clarity to the play’s compelling darkness.”
—Kimberly Benston, President and Francis B. Gummere Professor of English, Haverford College

“No one has inhabited Shakespeare more intimately—as teacher and actor as well as scholar—than Sherman Hawkins.”
—Lawrence Danson, Professor Emeritus of English, Princeton University; editor of On King Lear, author of Tragic Alphabet: Shakespeare’s Drama of Language, The Harmonies of The Merchant of Venice, and Shakespeare’s Dramatic Genre

“Sherman Hawkins is one of the moral and intellectual models whom I’ve tried to emulate throughout my career, and in much of my life outside my career. His ideas changed lives simply by telling the truth.”
—Edward Mendelson, literary executor of the Estate of W.H. Auden; Professor of English and Comparative Literature and Lionel Trilling Professor in the Humanities, Columbia University.

There are no reviews yet.

Be the first to review “Promised End: The Last Scene of King Lear” Cancel reply